Turoldus
The Trouble with Roland

This web essay is meant to aid in the assessment of the character of Roland, the putative (and in any case eponymous) hero of the 12th-century Old French Chanson de Roland. 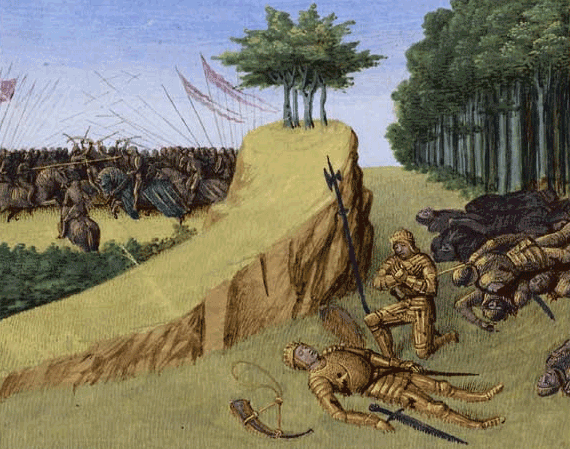 The Death of Roland

It is well known that this paladin, ignoring the advice of his contemporary but wiser comrade Oliver, refuses to blow his horn and summon Charlemagne to the aid of the French rearguard, under attack by vastly superior Saracen forces. Later in the battle Roland reverses his decision, but only when it is too late for anyone in the rearguard to be saved.

What is Roland’s justification for his initial refusal? Honor. His, and, through him, that of his relatives and of Frenchmen as a whole: however, the reputation of these larger bodies exists only in relation to his:

Now, not only Oliver, but every person with half a brain has always acknowledged — not excepting half-brained people in the Middle Ages — that other considerations than honor alone must enter into military decisions. In Oliver’s heated words:

The assonating and indeed rhyming words folie and estultie cover the same semantic ground; both can be used to refer to rash behavior in a military situation. They are equally opposed to mesure and vasselage par sens.

Roland’s Desmesure, plus: Orgueil or Fierté?

There is no question that, in refusing to blow his horn, Roland was not acting fully in accord with medieval notions of martial sens and mesure and that he disregarded, in favor of glory, military concerns that would have been normal in the 8th century, the 11th, or any other. The question is rather: just how much weight does the poem place (or want us to place) on this desmesure? Just how much does it detract from the positive side of Roland’s heroism — or, to use the terms common to chansons de geste, from his vasselage, his baronie, his chevalerie?

To help answer the question, I will list passages in which Roland is associated with terms of value, negative or positive, giving the original (old) French, tranlations, and a bit of commentary where it seems appropriate. At the outset, I draw attention to two things:

First, keep in mind who is speaking. When a character in the poem refers to Roland, there may be reason to temper what is said in view of what we know about the character’s relationship with Roland.

Second, a fundamental matter of lexicology. French has two words that can both be translated by English “pride.” One tends to be primarily negative:

It comes from a Germanic word and, in modern French at any rate, means excessive pride, hence “arrogance, haughtiness.” (In English we have a borrowed form of the adjective, “orgulous,” that is unfortunately not very current nowadays.)

The other French term is:

It comes from Latin ferus and in modern French has a largely positive connotation; it is legitimate, well-founded pride or self-esteem.

Now, the modern connotations of these words orgueil and fierté do not necessarily apply to their use in medieval texts in precisely the same way; nevertheless, it may be a good idea to keep them in mind.

In addition, fier and fierté in Old French can retain something of the original meaning of Latin ferus and feritas, that is to say: “wild, untamed (animal); uncultivated; barbarous, cruel, savage.” Our English word “fierce,” based on French fier(s), keeps more of these older and more negative meanings.2

Here then are passages in which Roland or his behavior seemingly comes in for a value judgment, made by either a character in the poem or by the narrator.

Roland and His Stepdad

When Roland counsels against trusting in Marsile’s good faith (laisse 14), a speech that includes a reminder of all the conquests Roland has made during their seven years in Spain, his stepfather Ganelon stands up fierement (line 219) – proudly? fiercely? – and calls it a:

Of course, given the bad feeling between these two, Ganelon can be expected to interpret his stepson’s high opinion of himself in the worst possible way…

Shortly afterward, when the question has come up of whom Charlemagne will send to the Saracens as an envoy and Roland has proposed himself, his buddy Oliver intervenes:

Oliver knows that his friend would make a terrible ambassador. — Note the wonderful word pesmes, which is the Latin superlative form pessimus = “very bad, worst.” It means, indeed, very bad, the worst of whatever kind the thing is (a disposition, a day, a battle, an experience): really dreadful. — The two adjectives pesmes and fiers work together in a binomial way, combining their meanings to produce something like “totally out of control, like a wild animal.”

When Roland proposes that his stepfather should be sent on the perilous mission to the Saracens, Ganelon, mult anguisables = “greatly tormented,” spits out:

Ganelon’s characterization of his stepson is a bit extreme, and shows just how wrought-up he is, given that Roland’s words were very brief and, presumably, uttered very calmly, even if with evil intent (20.277).

A further chance for Ganelon to express his opinion about Roland comes when he is parlaying with his counterpart among the Saracens, Blancandrin.

We jump now to just before the fateful battle. Oliver has urged Roland three times to blow his horn and Roland has refused him three times (or alternatively a single request and a single refusal have been related three times – laisses 83-85), and the narrator intervenes incisively with the famous lines:

The quality indicated by proz, modern French preux,3 overlaps with the quality of vasselage. The division (R = preux, Oliver = sage) is clearly not absolute: Oliver is sage, yes, but also preux, as we are told elsewhere in the poem (43.576). Indeed, preux and sage are qualities ought to go together; preux itself can contain the idea of wisdom. So, reciprocally, if Oliver can be preux, you would expect that Roland can be sage. Only, that seems not to be the case: Roland is decidedly lacking on this side. Can we say that his outstanding valor makes up for it?

As the battle continues, two more appearances of fier:

To finish once and for all with fier, I’ll jump ahead to laisse 160 and these lines in which the Saracens are wondering whether they will ever be able to bring this man down:

Later in the battle, we find orgueil applied to someone other than Roland. The hero has just slain Valdabrun, a mighty Saracen.

Here also, once again, is the complaining speech Oliver produces when Roland at long last admits the rearguard could use some help.

After Roland has blown his horn, the scene cuts back and forth between the rearguard and the main army, in fine cinematic fashion. The word orgueil gets used one last time now in conjunction with Roland, and once again it is Ganelon who employs it.

As the battle continues, we learn the opinion of no less a person than Archbishop Turpin, a fighting prelate fit to inspire a Frère Jean des Entommeures (who was a fighting friar). Having witnessed Roland cutting the enemy to pieces, he exclaims:

The Archbishop, at least, and at least at this point in the battle, has no bone to pick with Roland’s knightliness.

Roland’s and Oliver’s Final Thoughts, including a Vergilian Echo

The battle continues on its deadly way; twenty thousand Frenchmen, including the twelve peers, eventually fall before the enemy forces. As befits the passing of so great a warrior, Oliver’s death throes extend over a number of laisses. At the very last:

Oliver’s last thought is a prayer for Roland, above everyone else (including the Emperor). He has had a beef with his boon companion, but he is over it now.

Roland is still on his feet, though he and Archbishop Turpin are the only Frenchmen still fighting,, when the poet allows himself the following long-winded (for him) appreciation of his hero:

Roland definitely does not like the arrogant, the orgeuilleux, regardless of whether or not he himself is given to that fault. Who does he approve of? People like his companion Oliver, who, he says of him in his lament, had no equal:

The description is reminiscent of what Anchises tells his son Æneas is the special calling of the Roman:

parcere subiectis et debellare superbos.
to spare the submissive and to subdue the haughty. —Vergil, Æneid 6.853

Who might be the orgueilleux, the haughty, that Oliver always strove against? In this context, they are misbehaving knights, those who use their fighting prowess in the wrong way or for the wrong purpose: Saracens in the first place but not necessarily them alone. The first element of the Anchisean formula (“to spare the submissive”) seems not to appear in the French text, unless we say that the Roland-poet has replaced it with a more military variant: just as Oliver always fought down wicked knights, so he always supported prozdomes in need of his help, prozdomes meaning, here, essentially: worthy knights, those who use their prowess in the right way or for the right purpose.

Who might these worthy knights be that Oliver supports?

You will note that, whereas Jessie Crossland has translated the verb cunseillier as “counselling,” I have translated it with the more general “aiding.” In fact the Old French verb could have either the more general meaning of “helping someone who needs help” and the more particular one of “giving advice to someone who could use advice.” Now, in the more general sense of the verb Oliver gives aid to all his fellow Christian warriors by fighting alongside them in defense of the same cause; in the more particular sense of giving advice it is above all his companion Roland that he sustains (we have seen him doing so both before and during the battle of Ronceval). In praising Oliver for the important service of counsel he provided, Roland here gives a clear enough (if indirect) indication of who in the end he thinks was right in their recent disagreement, and shows thereby that he himself has edged at least a little closer to the quality of sage.

The Balance Sheet on Roland

A complete portrait of Roland as he appears in the poem named after him would need to consider other matters as well, the most important of which is the lengthy description of the hero’s passing. But the death of Roland deserves a web essay of its own.

However, from the passages examined above we can affirm at the very least that: