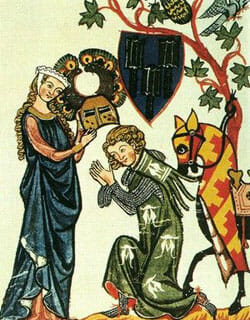 On one of the many times over the past thirty years when I have taught Arthurian Romance, it became clear after a mid-term exam that some concepts I thought fundamental to the proper understanding of Chrétien de Troyes were not getting through.

So, I came up with the following nine theses.1 It was quite a long time ago. Since then, I am happy to say, students have become more perceptive by leaps and bounds.

2. When Poles Would Do Better to Collide

One of the chief things the hero has to discover is how he is supposed to bring together the two poles of his existence, prowess (his knightly endeavors) and courtesy (love).

Love causes more trouble than prowess. None of the knights is really lacking on the side of valor (not even Erec); contrariwise, each of them has problems when it comes to personal relationships.

4. The Heart of Fin’ amors: and Marriage

For Chrétien, the ideal kind of love, though it may initially be stimulated by physical beauty and charming manners, ultimately resides in a true “union of hearts” – a mutual understanding and commitment that is permanent in character. Far from being incompatible with marriage, it is incomplete without it. (The Knight of the Cart is, one hopes, an exception that proves the rule.)

Chrétien makes use of the Celtic-marvelous as a (dark) mirror of the hero’s inner growth.

In the opening section of the story (li premiers vers), the hero gets the girl and the glory. He is so dazzled and entranced by the outward splendor of what he has acquired that he simply stops where he is, which is not very much of anywhere. (What he is dazzled by, one could say, is actually his own image, as reflected by Enide. Cf. Perceval’s similar fascination with dazzling exteriors.)

I imagine that what Erec needs to work his way toward is an understanding of (his) life as an ongoing process in which love has got to have an important, if not in fact central, place. I suspect that what he realizes, at the end of the story, is something like this: that he cannot be a good knight (or king) unless he is also a good lover. (Not to forget: this is Enide’s story as much as it is Erec’s.)

Here too, love and prowess (the hero’s practice of same) have both got to be reformed and put into the right relationship. The hero’s eagerness to establish and maintain his reputation lets us suspect that his idea of what knighthood is for is too narrow (indeed self-centered) (– and can it be that this is the case because he does not in any way see it as related to love?). His love, too, is, in the proof, superficial, glib, all (or mostly) on the surface.

In the second part of the story, we see him acquiring a solider appreciation of what knighthood can be and what love should be, as well as, apparently, some idea of their connection, something like: knighthood inspired by love → knighthood as service. (Admittedly, there are perplexing aspects to this part of the romance, notably the strictly exterior view we are given of the hero and the stubbornness of the lady.)

Much of the above applies, except that love, in the sense of romantic love, has been largely superseded or absorbed by another kind of love, which takes the place of fin’ amors as the “thing-in-relation-to-which” knighthood needs to see itself.

9. Their Own Cases: Lancelot and Gauvain

All the above applies principally to Erec, Yvain, and Perceval. Lancelot and Gauvain seemingly follow a different path…