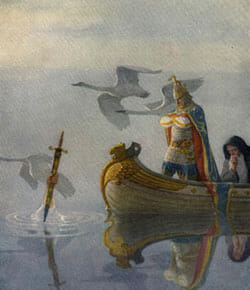 I teach a course “King Arthur in Europe” in two versions, one subtitled “The Search for the Holy Grail,” the other “Lancelot.”

Both emphasize the pan-European character of Arthurian literature as it developed from its Celtico-French beginnings (so to call them) in the 12th century and spread during the rest of the Middle Ages to involve just about every vernacular literature of Western Europe.

Common to both versions are the following topics, here listed in more or less chronological order.

Also relevant to both versions:

The “The Search for the Holy Grail” version in addition focuses on these texts:

The “Lancelot” version, for its part, covers in addition: