Below is the Old French text of Marie de France’s Lanval, one of her twelve “lays” of Breton inspiration, together with an English translation by the Professor (me). Interspersed are notes on a few passages. For a more in-depth study, see the Commentary.

The text is that of the 1900 edition by Karl Warnke, as available at Wikisource. A scan of the printed book is here. I have also consulted the 1981 CFMA edition by Jean Rychner. Both editions prioritize manuscript “H” = British Museum, Harley 978, which I have also consulted online. (In manuscript H the Lais begin at folio 118r. Lanval is on folios 133v-138v. A PDF of these pages is here.)

I have borrowed the line numbering of Rychner and included only the lines he admits (those in manuscript H).

My translation adheres fairly closely to the Old French text, in particular with regard to verb tenses. A present tense verb I always translate with present tense1; a passé composé I always translate with a present perfect. (You will be relieved to hear that I am less rigid in translating imperfects.) The resulting awkwardness I allow in favor of transparency to the original, even while realizing that, often enough, an Old French author chose the tense to suit the meter or the rhyme.

Except when they are used in direct address, I have translated ami(s) as “lover” and amie as “lady friend.” (On account of the, you know, bienséances [proprieties].)

There is a much smoother 1911 prose translation by Eugene Mason available at Wikisource. Disadvantages of it are that 1) it is based on an earlier, less satisfactory edition of the Old French and 2) it bowdlerizes rather more than it should the physical side of the human-immortal relationship. There is also a 1990s English verse translation by Judith Shoaf.

Line 5. Carduel could be Carlisle in Cumbria, formerly Cumberland, or it could be a site in Wales. See this Wikipedal stub.

Line 6: Artur, li pruz e li curteis. At least from Geoffrey of Monmouth on (History of the Kings of Britain, 1130s), King Arthur was the accepted paragon of the two essential virtues of the courtly knight, prowess and courtesy.

Line 9. Logres is the name of Arthur’s kingdom. In modern Welsh, it is used to refer to the part of the island overrun by the “Saxons” (Lloegr). 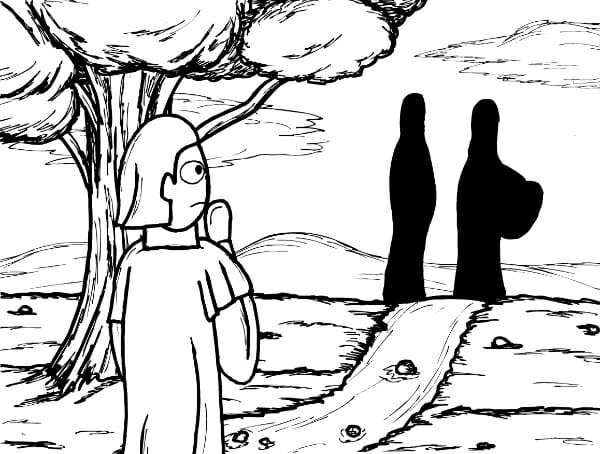 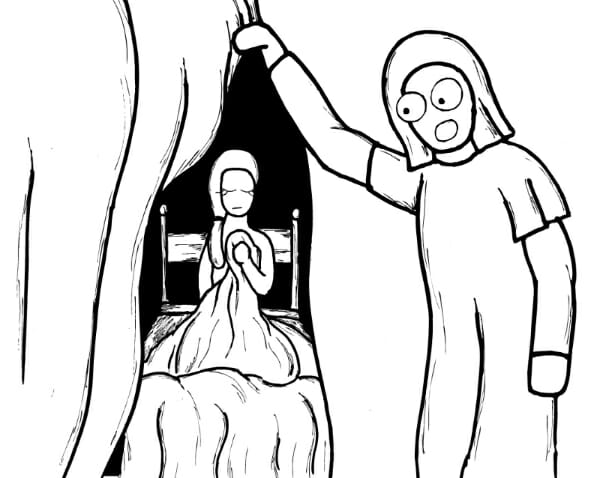 The Fairy Maiden in her tent.

Lines 82-92, 98. Medieval fascination with costly accouterments should not be interpreted (as it might in a modern context) as merely crass; so says C.S. Lewis, speaking about precisely this passage (Discarded Image, “The Longaevi”).

Line 92. The word pucele, “maiden,” has perhaps a somewhat broad meaning when applied to a fairy being. Aphrodite might be an appropriate comparison.

Lines 112, 128. Both lovers are willing to abandon the rest of their societies in order to be with the beloved.

Line 133. The word cors (“body”) no doubt means more than just the physical, and could be translated “person” (“I grant you my heart and my person”). However, the physical is certainly included here. The word saisine (possession, ownership) in line 150 also underscores the point.

Lines 135-42. There is no more shame in the penniless Lanval’s accepting the financial support of his (magically) wealthy mistress, than there is in a Jane Austin heroine’s accepting the proposal of a wealthy suitor. Both have to have an adequate monetary foundation to fulfill their rôles in society.

Lines 143-50. This prohibition has a basis in two different domains. One is that of “courtly love” (fin’ amors): a lover never reveals the name of his beloved, so as to safeguard both the lady’s reputation, and the lofty character of their love. The other is that of fairy lore: a mortal who is allowed commerce with fairies must never reveal hizzer privilege to other mortals, on pain of being forever cut off.

Lines 163-70. It is a common occurrence in fairy lore that a particular mortal may be so blessed (or cursed) as to be able to see fairy folk, whereas ordinary mortals cannot. Here, the invisibility of fairy folk is placed in addition at the service of fin’ amors (“courtly love”) by keeping the lovers’ trysts (likely to be frequent in the case of Lanval and his lady) hidden from prying eyes.

Lines 195-200. In any age, Marie’s 12th century, Lanval’s (whenever that was), or our own, an encounter such as Lanval has just been through is acknowledged to be vanishingly rare. It is no wonder the hero questions the experience.

Line 215. One of the meanings of joie (as of joi, the Occitan equivalent) is the blissful experience of sexual union between two fins amans (noble lovers). The two words joie and deduit here form a binôme (doublet), that is, a unitary concept. There should be no doubt about the physical component in the relationship of Lanval and his lady. 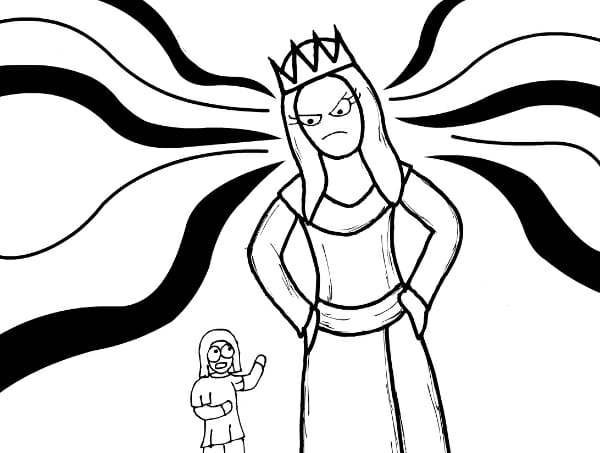 The fury of Guenevere scorned.

Lines 277-86. The queen’s rejoinder puts one in mind of how, in the 12th-century Roman d’Enéas (Romance of Æneas), a text Marie knew, Lavinia’s mother makes a similar accusation with regard to the Trojan hero. In both cases, the accusing women refer to common report (which report, if it existed at all, they have leapt on opportunistically).

Line 433. Why is the Duke of Cornwall the spokesperson for the pro-Lanval party? Perhaps because of the important and varied rôle the holders of this title play in Geoffrey of Monmouth’s History of the Kings of Britain, a source Marie would have been familiar with, if only through the Old French version by Wace. In Geoffrey’s pseudo-history, the first duke is a great supporter of Brutus (Æneas’s great-grandson and the first [human] colonizer of Britain); a later duke becomes the mortal enemy, in a matter of spousal honor, of Uther, the father of Arthur. It is thus perhaps appropriate for the holder of the title in this story to head the loyal opposition.

Lines 434-60. I have followed the interpretation of Jean Rychner.3 The speed with which the duke dismisses the first charge (treason, in the attempt to seduce the queen), that is, the ease with which he accepts Lanval’s protestation of innocence – effectively reducing the matter to a case of “He said, She said” – is noteworthy. Are the virtue and the word of the queen already dubious, in the eyes of Arthur’s barons?

Line 540. The subject of the verb tindrent is not clear, so we cannot be sure who is not concerned about the mules, the two maidens, or the men the king has sent to conduct them. More of a puzzle, though, is: Why should they not be concerned? Perhaps, because, these being fairy mules, they don’t need anyone to take care of them…?

Line 632. I.e., bystanders more than willing to, for instance, help her onto her horse and thus facilitate her departure. 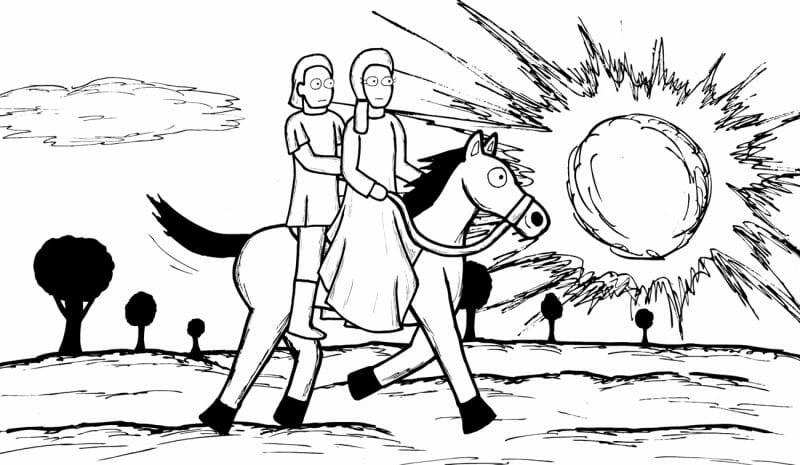 Lanval and the demoiselle ride off.

A link to a commentary will appear here shortly.