Below is the Old French text of Marie de France’s Bisclavret, one of her twelve “lays” of Breton inspiration, together with an English translation by the Professor (me). Bisclavret is a short but charming tale of lycanthropy, a highly unusual condition that is nonetheless mentioned by a number of medieval authors. In keeping with Marie’s other lays, the story serves as an exploration of the forms of love and loyalty (and their opposites).

Note that, although the shape-changing hero is positively presented, there is no question but that werewolves are nasty, vicious creatures, much more intent on destruction than a run-of-mill natural wolf:

This trait of unusual viciousness has of course been retained in much more recent (twentieth and twenty-first century) depictions of the werewolf.

As in my file on Marie de France’s Lanval, the text presented is that of the 1900 edition by Karl Warnke, as available at Wikisource. A scan of the printed book is here. I have also consulted the 1981 CFMA edition by Jean Rychner. Both editions prioritize manuscript “H” = British Library, Harley 978, which I have also consulted online (the Lais begin at folio 118r; Bisclavret begins at folio 131v and ends at folio 133v).

In my translation, I have not followed Warnke in capitalizing “bisclavret” throughout. When it is used indefinitely (“a” bisclavret), and when it is preceded by the definite article (i.e., referring to this particular…bisclavret), I treat it as a common noun. Only in the remaining cases, when it seems to be used as a personal name, do I capitalize the “b.” (Only at line 14 do I deviate from these principles.)

My English version does not aim at elegance, but is a line-by-line rendering that follows fairly closely the syntax of the original. While this approach prioritizes accuracy (of a limited sort) and facilitates comparison of translation and original, the resulting prose is bland at best and occasionally downright clunky. Marie’s original rhyming couplets, in contrast, are light-footed and witty, qualities that would have been enhanced by oral performance. So, please keep in mind that, while the content of the English is pretty much Marie’s, the insipidness is not.

A feature of Old French verse that may seem particularly strange when reproduced in modern English is the variety of verb tenses used for narration. Present appears frequently (even today, French writers are very fond of the historical present, for which see this language topic). Meanwhile, Marie’s choice of past tense (passé composé, passé simple, imperfect, and even pluperfect) often seems governed by the needs of meter or rhyme and is otherwise arbitrary. I have followed Marie’s choices in always translating a present as a present, but for the past tenses I have given myself more leeway, usually translating them with an English simple past. (In the translation of Marie’s Lanval, however, I have reproduced the past verb tenses more exactly.)

I have placed Marie’s Old French and my modern English side-by-side for ease of comparison. You can also consult online the pages of the main manuscript (Harley 978, British Library) in which Marie’s Lays are found. Links, in square brackets, are included in the Old French text below. They will take you to a particular numbered folio, that is a “leaf,” of the manuscript, either front (recto) or back (verso). Columns a and b will both appear on the recto side of a folio (a on the left, b on the right); columns c and d will both appear on the verso side (c on the left, d on the right). 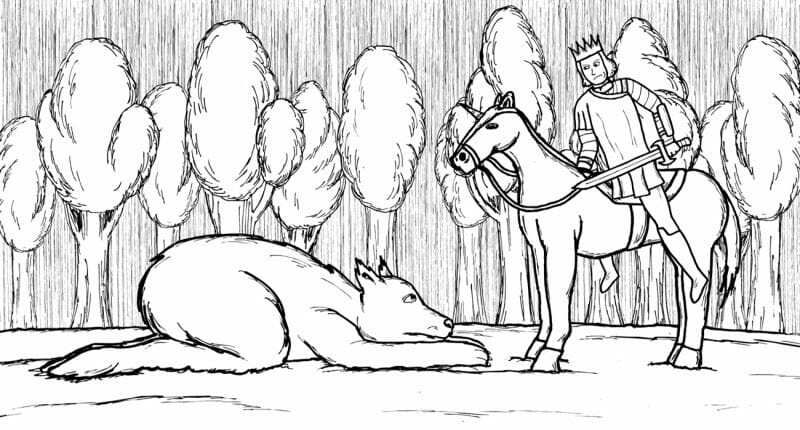 Bisclavret begs for mercy from the king. 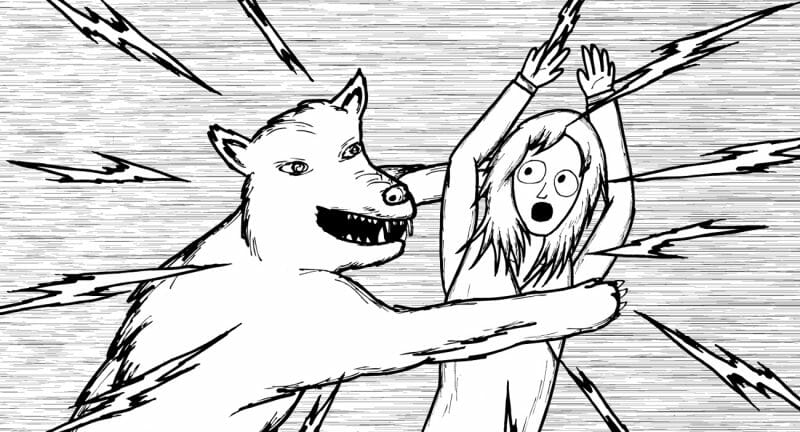