For the second post in this multi-post series, see Mark in the Bee-Hive State Part 2.

What did ‘Mark’ need to do first as he headed into the desert? Divest himself of all attachments to the civilized world, of course. 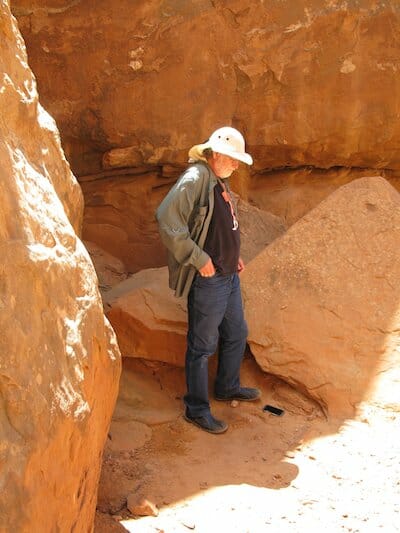 Mark looks at the smart phone he intends to discard.

Henceforth ‘Mark’ would experience many moments of weariness.

Mark rests wearily beneath a mountain cone; he sits wearily in a stony landscape, fixing his attention inwardly; at an especially low point, he takes refuge from the heat and his own confusion in a red rock wall.

Fortunately, ‘Mark’ was not without spirit guides. In addition to the angel Moroni, whose aid could perhaps have been assumed… 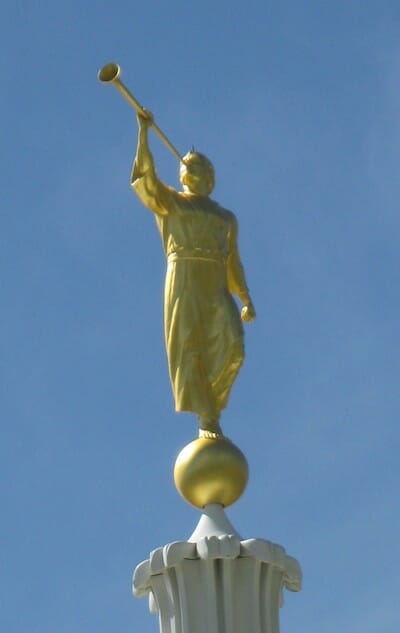 …’Mark’ could rely upon the four spiritual sisters of Canyonlands, improperly called “The Gossips”… 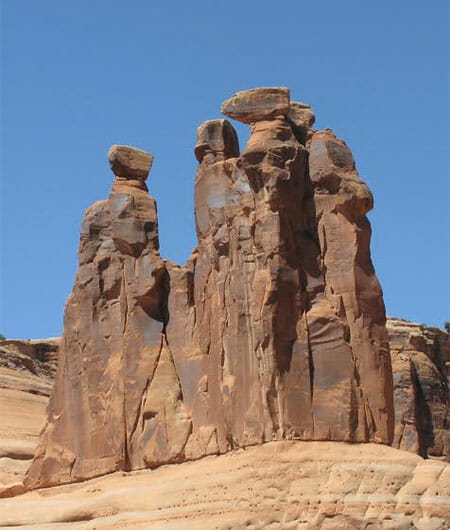 ‘Mark’ also had the wise counsels of the Stony Elephant of Arches to guide him: 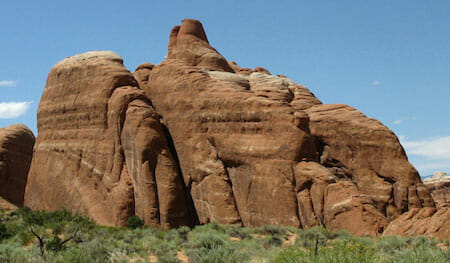 The wise old Stone Elephant helps Mark on his way.

For the most part ‘Mark’ followed their advice. 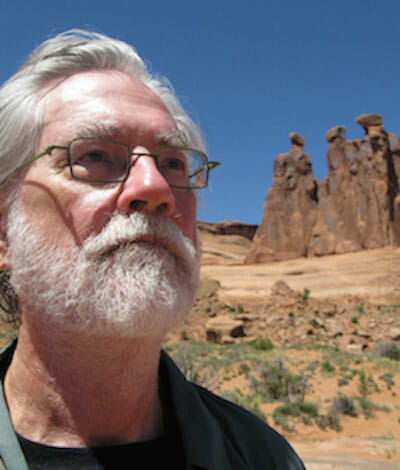 They warned him, however: “You will see many a magnificent spiritual sight through many an arch. You may contemplate these sights as much as you like; but do not go through the arch, unless a clear sign tells you to do so!”

For a long time ‘Mark’ did just as he was told, staying on the hither side of the arches and musing on all he could survey from that position.

So he did at the Sand Dune Arch… 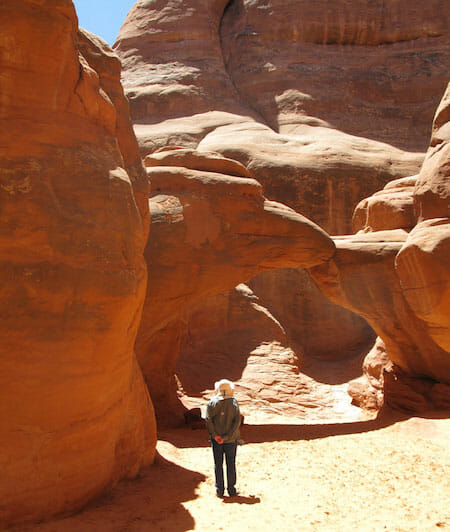 …and at the Pine-Tree Arch (so called because of the pine tree, which appears to be wilting)… 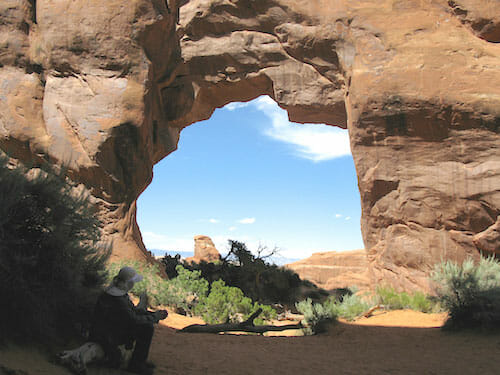 …as well as at the grand Mesa Arch island in the sky: 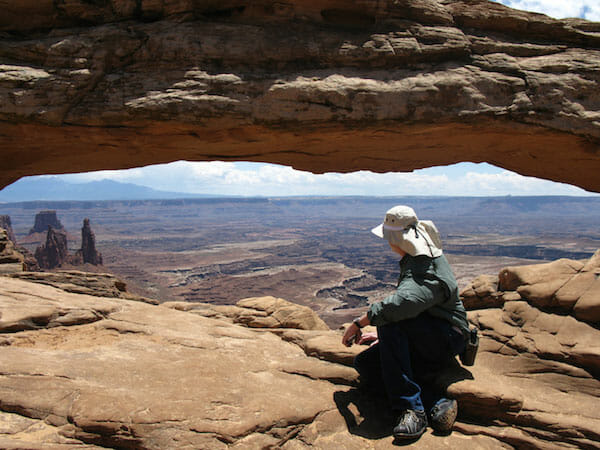 As a result of his manifold contemplations, ‘Mark’ grew in wisdom… 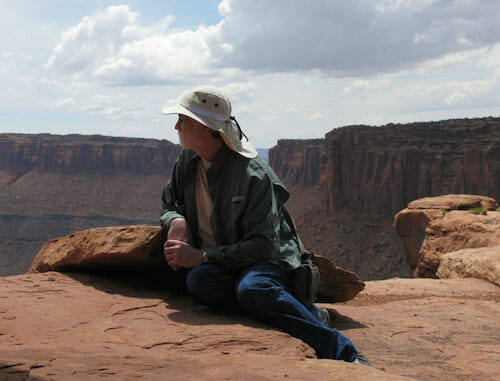 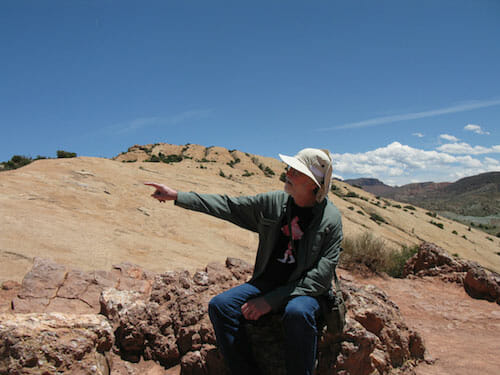 But a time came when ‘Mark’ began to feel overwhelmed by the dry severity of his spiritual visions. 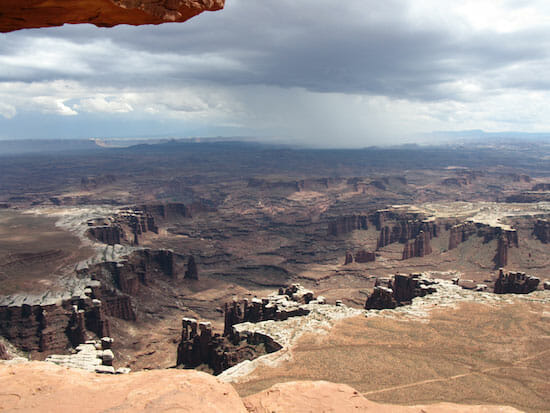 He was less and less able to see through to their inner significance and be nourished by it. He longed for the sight of wetness…of water…of a blue liquid of any kind. He was haunted by hallucinations such as this one: 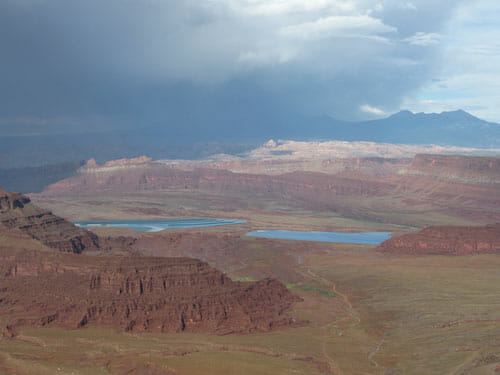 In his delirium, he told himself that one of the so-called “Tunnel” arches would take him to a desired land of plenteous H20. He gazed at them day after day… 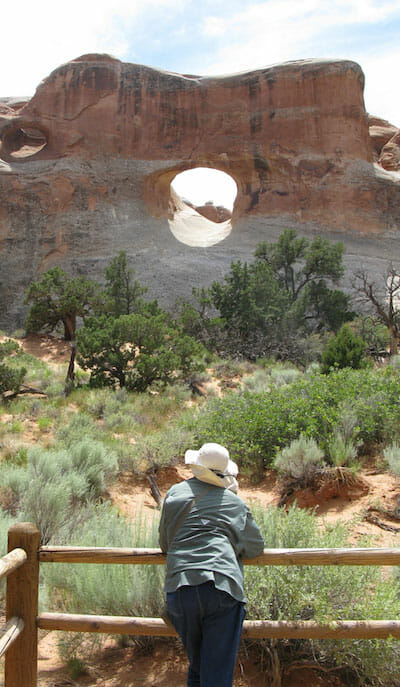 “If I can just get there and get through,” he said to himself, “I know that arch will take me where I want to go!” 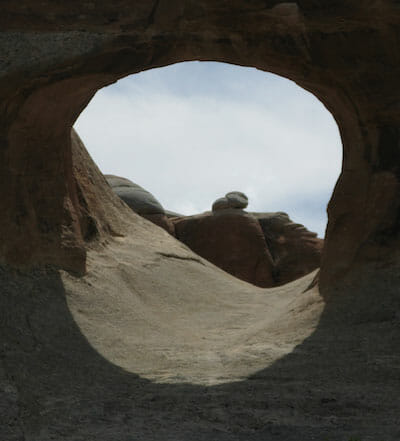 At length ‘Mark’ did make it to the longed-for arch and enter through it.

For the fourth post in this series, see Mark in the Bee-Hive State Part 4: The Salty Terror of Saltair.