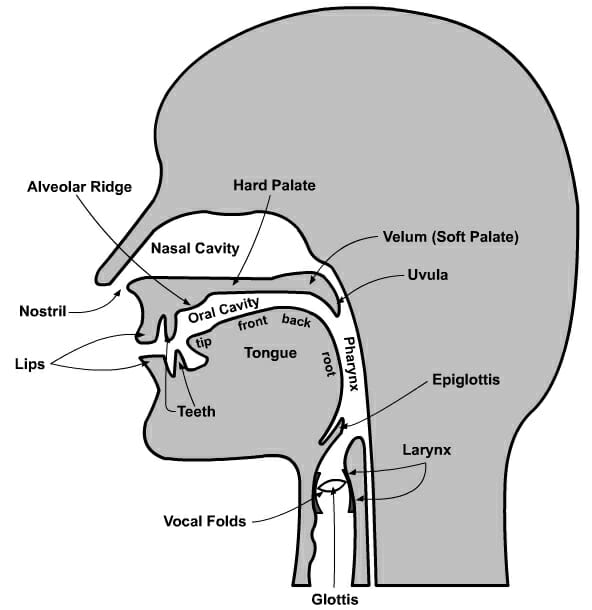 II. The Tongue, the Mouth-Top, & Consonants They Make

The tongue is divided into four parts: tip, blade, back, and root; the first three are used in speech production in French and English.

The top of the mouth is divided into four parts: the dental region (the alveolar ridge), the hard palate, the soft palate (the velum), and the uvula.

Not surprisingly (given the rules of our physical universe), corresponding parts of the tongue and the top of the mouth pair up, as it were, in the production of speech.

The tip of the tongue make

B. Lamino-Palatal: Blade of Tongue & Palate

The blade of the tongue works together with the very beginning of the hard palate, just as you are coming off the alveolar ridge; it is therefore called prepalatal or alveolar-palatal. The sounds produced:

C. Dorso-Velar: Back of Tongue and Velum

The back of the tongue and and the soft palate or velum (the part of the roof of the mouth where the cartilage stops) produce:

D. (Dorso-?)Uvular: Back of the Tongue and the Uvula

The back of the tongue and the uvula together produce (putatively) the arch-typical French r, called le r grasseyeux.

III. English-French Glossary to the Diagram

This work is licensed under a Creative Commons Attribution-NonCommercial 4.0 International License.
Mad Beppo