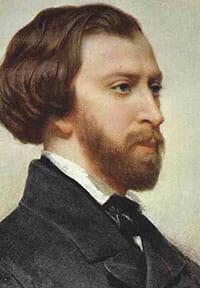 This file is a discussion of Alfred de Musset’s poem “Tristesse,” focussing especially on the use made in it of the passé composé.

As an undergraduate, long ago when American New Criticism still reigned, I was taught to despise the effusions of the romantic poet Shelley, such as in his “Ode to the West Wind”:

I fall upon the thorns of life! I bleed!

About the same time I learned about the French poet Alfred de Musset (1810-1857), who came slightly later, and was even more inclined to reflect in verse on his own unhappiness. The poem “Tristesse” epitomizes his attitude of complaint.

I am sorry to have to report that I have not yet succeeded in undoing the effects of my early training in this regard. Fortunately, the point in this file is not the high points of world literature, but grammar.

You can hear recordings of the poem at these places:

An amusing discussion of the poem, initiated by some poor lycéen(ne) having to write a commentaire composé on the text, can be read here at EtudesLittéraires.

It has the force of an English present perfect: “I have lost,” rather than of a simple past or preterite (“I lost”).

The form jusqu’à (and other combinations, e.g., jusqu’en, jusque dans, etc.) is normally a preposition meaning “up to, all the way to, until”:

However, it can also mean “even” (by way of “everything-up-to-and-including”) and be used with a direct object:

There are two nouns for “pride” in French. One is positive, the other negative:

For more on the distinction between fierté and orgueil, see this text commentary: The Trouble with Roland.

faisait  is 3rd person singular imperfect of faire. faisait croire is an example of the faire causatif construction.

See the French Language Files Aspects of French Past Tenses and Faire causatif.

The subject of the infinitive croire is implicit: “us, people in general.”

Verbs indicating a mental state (as connaître [to know], croire [to believe]) will normally be in the imperfect, because we are not interested in when the state began or finished.

See Functions of the Imperfect and Verbs Like Paraître

When you do put a mental-state verb into the passé composé, it can be because you want to emphasize:

The first applies to j’ai connu, which I translate as “When I first got to know (Truth).” The second applies to j’ai cru: I thought that way back then, but I have ceased to do so since that time.

Once again we have mental-state verbs (comprendre, sentir) that (nonetheless) have been put into the passé composé; the reason is to emphasize “the moment when the state began.” One might translate the line: “When at last (or “eventually”) I understood and felt it/her.” Both verbs contrast with the imperfect verb était in the last line of the quatrain: the disgust was present even before he actually succeeded in “understanding” Truth.

The two past participles (comprise, sentie) are feminine singular, to agree with the preceding direct object l’ = la = la Vérité.

Theoretically one should not use en to refer to a person, but one could say that, as a personnification, Vérité (Truth) is halfway between a person and a thing.

Once again, we have two verbs, at least one of which is a “mental-state” verb (ignorer = “not to know”) that one would normally expect to find in the imparfait, placed in the passé composé. We can add the reason for the choice as a third to the list given above, to emphasize:

B. What’s Up with the Masculine Plural Participle passés?

se passer de is a pronominal verb of the “idiomatic” or “subjective” sort. The past participle passés is in the masculine plural form (with an extra “s”), because it is agreeing with the direct object pronoun se, which agrees in person and number with the subject (ils).

ici-bas is a combination of the adverb ici (here) and the adjective bas (low), and hence means: “down here,” and consequently, “in this vale of tears, in this world of shadows, in this mortal life.” The contrasting expression and concept is l’au-delà (the other world, the beyond, the world “on the other side”).

The verb reste is also in the subjunctive present, appearing as it does in a “relative characteristic clause”; however, it is identically similar in form to the indicative present of the same person and number.

We have a “past (OR compound) infinitive” here, made up of the infinitive of the auxiliary verb avoir and the past participle of the “meaning” verb pleurer. The result is…exactly the same thing as in English:

II. The Form of the Poem

It is of course a sonnet. The line is octosyllabic. The rhyme scheme is a standard Petrarchan one, with the possible oddity that the rhymes of quatrain one are reversed in quatrain two –

The poem has only one really good case of enjambment (or, in French: enjambement): it is in the first tercet, between the 10th and 11th lines:

You rigorously cannot pause at the end of line 10; you have to go on immediately to the beginning of the next line, so as to complete the entire subject phrase (ceux qui se sont passés d’elle ici-bas). You can pause after Ici-bas in line 11, but not after d’elle in line 10. In the recordings linked to in the beginning of this file, some speakers observe this dictum, and some do not.

Call me insensitive, call me dumb; I’ve never been able to convince myself that this poem is not incoherent at points. Et notamment:

This work is licensed under a Creative Commons Attribution-NonCommercial 4.0 International License.
Mad Beppo